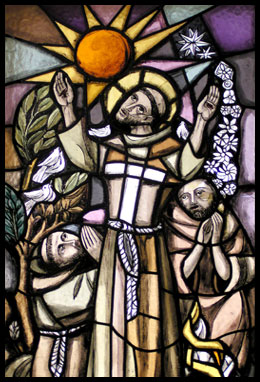 The Canticle of the Sun. St Francis

The Canticle of the Sun in its praise of God gives thanks for such creations as “Brother Fire” and “Sister Water”. It is an affirmation of Francis’ personal theology as he often referred to animals as brothers and sisters to Mankind, He famously rejected material accumulation and sensual comforts in favor of “Lady Poverty”.

Saint Francis is said to have composed most of the Canticle in late 1224 while recovering from an illness at San Damiano, in a small cottage that had been built for him by Saint Clare and other women of her Order of Poor Ladies. According to tradition, the first time it was sung in its entirety was by Francis and Brothers Angelo and Leo, two of his original companions, on Francis’ deathbed, the final verse praising “Sister Death” having been added only a few minutes before.

Most High, all powerful, good Lord,
Yours are the praises, the glory, the honour, and all blessing.

To You alone, Most High, do they belong,
and no man is worthy to mention Your name.

Be praised, my Lord, through all your creatures,
especially through my lord Brother Sun,
who brings the day; and you give light through him.
And he is beautiful and radiant in all his splendour!
Of you, Most High, he bears the likeness.

Praised be You, my Lord, through Sister Moon and the stars,
in heaven you formed them clear and precious and beautiful.

Praised be You, my Lord, through Brother Wind,
and through the air, cloudy and serene,
and every kind of weather through which
You give sustenance to Your creatures.

Praised be You, my Lord, through Sister Water,
which is very useful and humble and precious and chaste.

Praised be You, my Lord, through Brother Fire,
through whom you light the night and he is beautiful
and playful and robust and strong.

Praised be You, my Lord, through Sister Mother Earth,
who sustains us and governs us and who produces
varied fruits with coloured flowers and herbs.

Praised be You, my Lord,
through those who give pardon for Your love,
and bear infirmity and tribulation.

Blessed are those who endure in peace
for by You, Most High, they shall be crowned.

Praised be You, my Lord,
through our Sister Bodily Death,
from whom no living person can escape.

Woe to those who die in mortal sin.
Blessed are those who will
find Your most holy will,
for the second death shall do them no harm.

Praise and bless my Lord,
and give Him thanks
and serve Him with great humility.[3]

Coronavirus. A different kind of church

Dear friends, we are all facing great challenges,  and alongside many other parts of our usual social life, the church has had to respond, and we have had to restrict our social gatherings and limit our services.
What this means is a different kind of church, because we are church in many more ways than meeting on Sunday services… St George’s and St John’s are both working to find ways to nurture and support our communities…

Daily Prayer with the Church

St George’s Church is open for private prayer on Tuesday, Wednesday and Thursday, from 10am – 2pm (access via the door on the tower side).

Public Worship is on hold following the Lockdown announcement and the concerns over the new strain of Covid-19.

Our benefice service is available online weekly on Sunday from 10.00am on YouTube http://tiny.cc/stg-stj.

Morning Prayer and Wednesday Worship are both available during the week via Zoom. Contact the Benefice Office on 01635 41249 for details of the links.

The Benefice Office is staffed, but closed to visitors. Alex Brown can be contacted on 01635 41249.

St John’s Church is closed following the government’s lockdown announcement and the concerns over the new strain of Covid-19.

On-line worship continues via our YouTube channel and Zoom – details from the Benefice Office on 01635 41249.

The Benefice Office is staffed, but closed to visitors. Alex Brown can be contacted on 01635 41249.